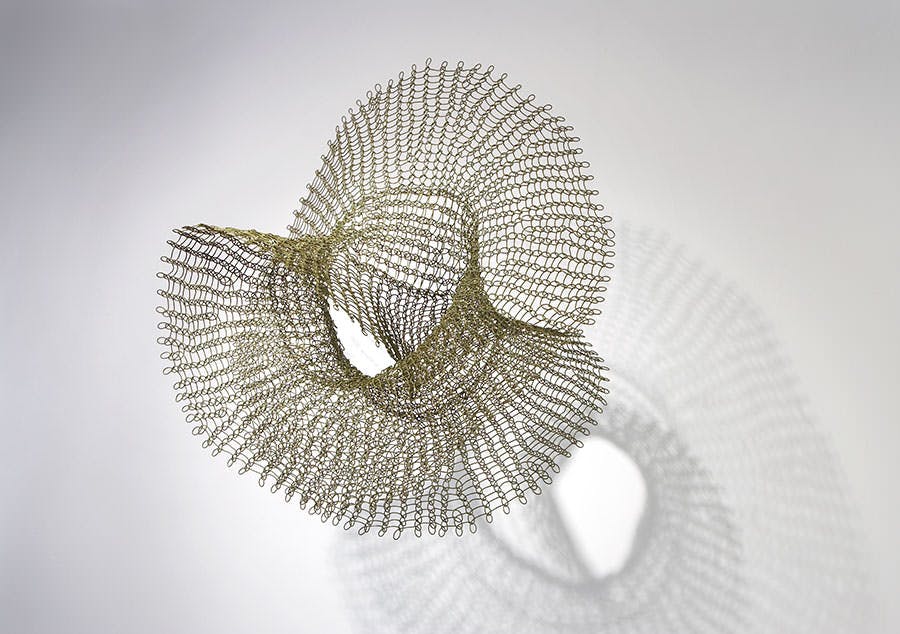 Learn something. Apply it. Pass it on so it is not forgotten.

Ruth Asawa was an American sculptor, an arts education advocate, and the driving force behind the creation of the San Francisco School of the Arts. Her sculptures can be found in permanent collections of prominent museums such as the Guggenheim, the San Francisco's de Young Museum and the Whitney Museum of American Art, while several of her fountains define public spaces in San Fransisco.

Ruth Aiko Asawa was born in 1926 in Norwalk, California to Japanese immigrant parents. They were truck farmers who grew seasonal crops such as strawberries, carrots, green beans, and tomatoes. From the age of six, Ruth often did farm work after school to help her family make ends meet. She was often given solitary tasks as she enjoyed working alone because it allowed her to daydream. Later in life, she recalled how an ordinary farm task influenced her work:

I used to sit on the back of the horse-drawn leveller with my bare feet drawing forms in the sand, which later in life became the bulk of my sculptures.

At the beginning of the 1940s, things took a turn for the worse. In the hysteria following the outbreak of World War II, the United States government feared that Japanese Americans would commit acts of sabotage against their country. Although no such act was ever committed, 120,000 people of Japanese ancestry living in the Western United States were removed from their homes and made to live in internment camps.

In February of 1942, Ruth’s father was arrested by the FBI and sent to a Justice Department Camp in New Mexico. In late April, Ruth, her mother, and five of her siblings were interned at Santa Anita Racetrack, where they lived in horse stables for six months. Thus freed from farm work, she spent her time drawing with artists from the Disney Studio who were also interned.

In September of that year, the Asawas were shipped by train to a camp in Rohwer, Arkansas. The Rohwer Relocation Center, surrounded by eight watchtowers and barbed wire fences, held 8.000 Japanese Americans and was built next to a cypress tree swamp. Here, Ruth became the art editor for the yearbook and completed her senior year of high school.

Through a scholarship from the Quakers, she continued to study to be an art teacher. In 1946, when she was unable to do her student teaching placement due to hostility against the Japanese, her friends encouraged her to travel to the experimental, liberal Black Mountain art College in North Carolina, to spend the summer studying art.

Black Mountain College was conceived by idealistic and progressive faculty from other colleges and an advisory board that included John Dewey, Albert Einstein, Walter Gropius, and Carl Jung. Their goal was to create a liberal arts college where democratic principles governed how the college was structured. Its progressive ideals put the practice of the arts at the center of the curriculum and made students responsible for their own education.

Josef Albers, who fled Germany after the Nazis closed the famous Bauhaus art school, established the arts curriculum at Black Mountain. The College came to be identified with experimental art in America largely because of Albers’ pedagogical efforts. His program included all of the arts, architecture, literature, dance, but also mathematics, and music. There were no beginning or advanced courses. Ruth was not awarded a degree. As Albers was fond of saying, “Art knows nothing about graduation.”

This summer proved to be such an enriching experience that the young artist decided to stay on scholarship for another three years. During her time there she was profoundly influenced by the community of artists and educators. This is also where she met her future husband, architect Albert Lanier.

Soon after, Ruth left Black Mountain to join Lanier in San Francisco, where they married against the wishes of their families. In the following nine years they had six children. Ruth worked at home in her studio, often at night and in the early morning while her children were asleep. Slowly but steadily, she began to receive recognition for her looped wire sculpture, exhibiting her work in solo and group shows. In 1954, Asawa was asked to explain her work for her first show at the Peridot Gallery in New York. She wrote:

A woven mesh not unlike medieval mail. A continuous piece of wire, forms envelop inner forms, yet all forms are visible (transparent). The shadow will reveal an exact image of the object.

Asawa often described these tied-wired sculptures with terms such as “tree” and “branching form,” as she used nature as her model. Over time, she moved into more abstract forms with geometric centers of four, five, six, and seven points. These tied wire forms gave her the freedom to explore how, as she said, “the relation between outside and inside was interdependent, integral.”

Mid 1960’s Asawa began experimenting with cast forms. For her first public commission, the Andrea mermaid fountain at Ghirardelli Square, she had to design the mermaid’s tail. Her solution was to first loop it in wire, then dip it in wax, and then cast it in bronze. She was captivated by the process of taking an idea from one material and then seeing it transformed into bronze. Her cast sculptures reaffirmed what she learned from her teacher Josef Albers:

The artist must discover the uniqueness and integrity of the material.

Even though Asawa is mainly celebrated as a sculptor, she originally wanted to be a painter. Growing up on the farm she developed a love for drawing plants. Her time at Black Mountain College taught her to see the fluid relationships between color, form, and space. Her student paintings from her college years are exploratory and abstract. After her marriage, she continued to draw every day — in the morning before her family was awake and when her children were watching television. Meandering lines and patterns and explorative variations of the same subject characterize her work. The act of drawing, not the drawing itself, mattered to her.

Influenced by the social unrest of the 1960s, Ruth joined other artists in advocating for social and political change. In 1968 she and her friend Sally Woodbridge co-founded the Alvarado Workshop - an innovative program that involved parents and professional artists in the public schools so that young children had the chance to develop more fully as individuals. Based on personal experience Ruth formulated her teaching philosophy:

A child can learn something about color, about design, and about observing objects in nature. If you do that, you grow into a greater awareness of things around you. Art will make people better, more highly skilled in thinking and improving whatever business one goes into, or whatever occupation. It makes a person broader.

They started the program with almost no money and throwaway objects — milk cartons, egg cartons, scraps of yarn, and flour, salt, and water. They would spend the entire summer working with baker’s clay, a cheap and safe material to introduce children to sculpture.

At about the same time, Asawa became a member of the San Francisco Arts Commission and began lobbying politicians and charitable foundations to support arts programs that would benefit young children and average San Franciscans. Soon, the Alvarado School Arts Workshop was in 50 public schools in San Francisco. It employed artists, musicians, and gardeners and recruited thousands of parents to be involved in public education.

In 1982 the artist decides to devote her energy to building a public high school for the arts in San Francisco in the heart of Civic Center, close to the city's world-class cultural organizations such as the opera, ballet, Jazz Center, the main library, and symphony.

In the late 1960s, Asawa’s activism and growing reputation as an educator led to many more commissions for public sculptures and fountains. These works can be found in San Francisco, San Jose, and other places in Northern California. For some of these works, the artist drew upon her life-long interest and experimentation with paper folding, also known as origami, for others she used her technique with baker's clay, cast in bronze. The artist loved to collaborate with different craftspeople on these bigger projects to learn all about the possibilities of her materials and to simultaneously encourage them to embrace the creative possibilities of their trade.

When I work on big projects, such as a fountain, I like to include people who haven’t yet developed their creative side — people yearning to let their creativity out. I like designing projects that make people feel safe, not afraid to get involved.

Asawa would go on to serve on the California Arts Council, the National Endowment for the Arts, and become a trustee of the Fine Arts Museums of San Francisco. In 2006, the museum presented a major retrospective of her work entitled ‘Contours in the Air, recognizing her contribution to post-modern American art.

Ruth died in 2013, at age 87. She left behind a vast legacy, not only as a ground-breaking artist and activist but as a teacher to anyone who sought to immerse themselves in the arts. In 2010 the San Francisco public arts school was named the Ruth Asawa San Francisco School of the Arts in her honor.

I think that I’m primarily interested in making it possible for people to become as independent and self-sufficient as possible. That has nothing really to do with art, except that through the arts you can learn many, many skills that you cannot learn through books and problem-solving in the abstract.