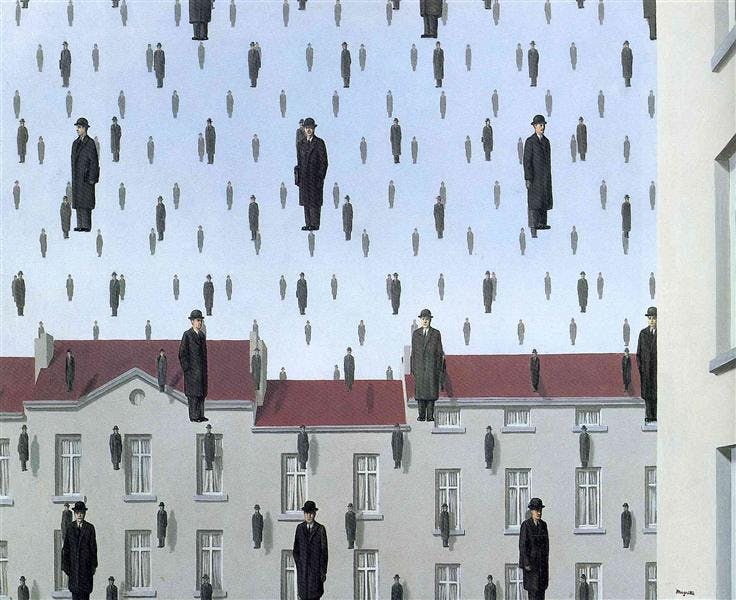 when one sees one of my pictures, one asks oneself this simple question, 'What does that mean?'. It does not mean anything, because mystery means nothing either, it is unknowable.

The surrealist and thought-provoking paintings of Belgian artist René Magritte, with their varied inhabitants such as pipes, clouds, bowler hats, and green apples, sought to make the familiar disturbing and have the viewer question their perception of reality.

Magritte, born in 1898, as the oldest son of a tailor and a milliner, first began taking drawing lessons at the age of 10. In March 1912, his mother committed suicide by drowning herself in the River Sambre. This traumatic event is theorized by psychoanalysts to be a recurrent theme in his later artworks in the form of his play between reality and illusion.

Magritte's earliest paintings were impressionistic in style, but from 1916, after starting his studies at the Royal Academy of Fine Arts in Brussels, he came under the influence of futurism and figurative cubism. The young artist, however, soon felt uninspired by his academic environment. In 1922, the poet Marcel Lecomte showed Magritte a reproduction of Giorgio de Chirico's The Song of Love. The work made such a profound impact that it brought Magritte to tears; he described this experience as:

one of the most moving moments of my life: my eyes saw thought for the first time.

However, it was not until 1926, after having served in the Belgian infantry for a short time, and while working as a draftsman at a wallpaper company, as well as a producer of advertising posters, that he reinvented himself as a figurative artist and seriously began his painting career. He was able to paint full time due to a contract with Galerie le Centaure. This resulted in his first exhibition, which included The Lost Jockey, 1926, a collage that is regarded as his first Surrealist work. Unfortunately, his premiere was poorly received by the art critics of the day.

Disillusioned, Magritte moved to Paris in September of 1927 to be closer to the French Surrealist group, a movement led by André Breton that sought to liberate the mind by subverting rational thought and giving free rein to the unconscious. Until the late 1920s, Surrealist painting had tended toward a style of biomorphic abstraction, often achieved through automatic techniques. Magritte, on the other hand, pursued a more representational, figurative style that, in his words, “challenged the real world” through a highly detailed depiction of ordinary subjects in an unusual context. His aim was to instill new meaning in familiar things. He would describe the act of painting as:

the art of putting colors side by side in such a way that their real aspect is effaced, so that familiar objects—the sky, people, trees, mountains, furniture, the stars, solid structures, graffiti—become united in a single poetically disciplined image. The poetry of this image dispenses with any symbolic significance, old or new.

Soon, he became a fixed member of the movement and in 1929, he exhibited at Goemans Gallery in Paris with Salvador Dalí, Jean Arp, de Chirico, Max Ernst, Joan Miró, Picabia, Picasso and Yves Tanguy.

Around this time, his work underwent an important development; Magritte began to integrate text into some of his pieces to investigate the relationship between word and image, often breaking and thus challenging the connection between the two. In that same year, he painted one of his most famous pieces: The Treachery of Images, in which a detailed representation of a pipe is combined with the cursive text: Ceci n’est pas une pipe (“This is not a pipe”).

Galerie Le Centaure closed at the end of 1929, and after three years in Paris, Magritte and his wife returned to Brussels, where he would remain for the rest of his life. He resumed working in advertising and formed an agency together with his brother Paul, which earned him a living. In the late 1930s, Magrittes’ artworks began to gain international popularity and, apart from a fair amount of large commissions, he had his first solo shows in the United States at the Julien Levy Gallery in New York in 1936 and in England at the London Gallery in 1938.

However, the war intervened and during the WWII German occupation of Belgium, the artist remained in Brussels, which led to a break with his friend and mentor Breton. Magritte started to experiment and briefly adopted a more impressionist, colorful style, an interlude known as his "Renoir period". In such works as The Forbidden Universe, 1943, Magritte painted a mermaid-like figure reclining on a sofa using a soft palette reminiscent of the Impressionist painter Pierre-Auguste Renoir. These paintings were, unfortunately, not highly successful in the perception of the public.

In 1946, he joined several other Belgian artists in signing the manifesto Surrealism in Full Sunlight, which signaled the commencement of his "Vache period," a much more provocative painting style. During this time, the artist supported himself through the production of fake Picassos, Braques, and de Chiricos — a practice he expanded with the printing of forged banknotes during the post-war period. His brother Paul and fellow Surrealist Marcel Mariën supported him in this venture. It was only at the end of 1948, that Magritte returned to the style and themes of his prewar surrealistic art.

Magritte’s influence on the arts has been far-reaching and profound. He reimagined painting as a critical tool that could challenge perception and engage the viewer’s mind. His work has been showcased in a number of retrospective exhibitions: at the Centre Georges Pompidou in France, the Museum of Modern Art, the San Francisco Museum of Modern Art, and the Metropolitan Museum of Art in the USA.