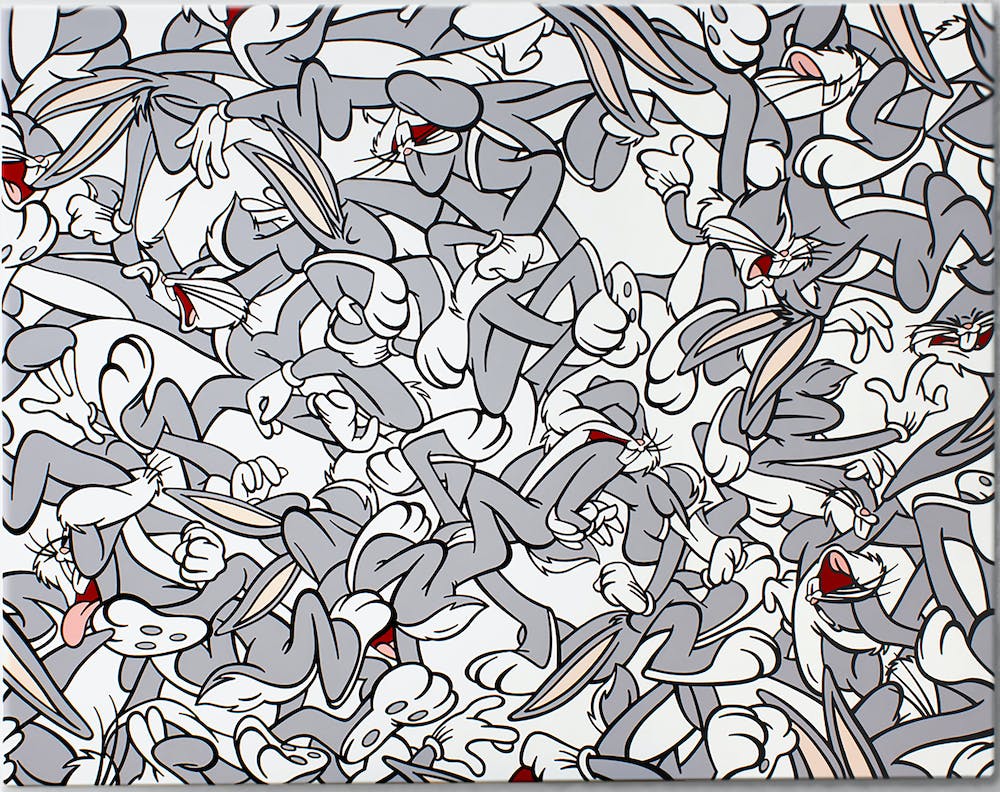 I would like the viewer to be conscious that beyond the fun appearance of my works lies a message about what we do to the animal kingdom and to nature in general.

The work of Spanish artist Miguel Ángel Fúnez is centered around a critical message concerning humankind’s capacity for destruction when it comes to the earth and the dominance we exercise over animals in particular. In his paintings, he uses popular imagery to articulate his personal views on the cloning of species, our estrangement from nature, and the manipulation of images. With a mix between technology-driven and traditional processes, he aims to explore the field of tension inherent in his medium: the painting as an image.

INTERVIEW WITH THE ARTIST

Q. Did you always want to be an artist?

A. Yes, ever since I was little, I knew my happiness was bound to art. It is difficult to know exactly when I decided to become an artist, but I remember I was always surrounded by pencils and paint. I always had some projects on my hands. I especially loved drawing, which I taught myself. I don't know why, but I never wanted to go to any academy. Instead, even though I was very young, I decided that I would study fine arts myself, a decision that my parents supported completely, and I will always be thankful for that.

Q. Why do you choose to work with famous cartoon figures? - does childhood nostalgia play a role?

A. Nostalgia is not the main topic of my work. Many of my works are built out of cartoons from the collective imagination that are torn apart, manipulated, and remade to formulate a humoristic, yet nuanced, comment around the practices of biotech. A collection of animals, manipulated and torn apart, broken like only cartoons can be broken as they jump, run, and move in their childhood universes. With my method, I aim to establish a relation (both tense and harmonic) between two different visual universes by way of fragmentation and a collage-like technique rendered in a postmodern aesthetic.

Q. You have said your aim is to formulate a critical message - could you describe the concept behind these artworks?

A. Immersed in a world of recollected images, I rewrite their meaning into a discourse about animal extortion. I focus on the creation of new hybrid species and 'impossible images', in many cases by making use of popular, almost iconic, imagery, to articulate a critical message that forms the conceptual core of my work. For example: the invasive presence of humans in nature; the cloning of species through biotechnology; our estrangement from all things natural; and the language of photography as well as the manipulation of images.

Q. Could you describe your artistic research process?

A. Through both digital and manual processes (I refuse to give up the action of hand-drawing with colored pencils or painting with acrylics), I always try to showcase the often conflicted relationship between man and nature. Too often, we view nature as something weird, alien, an object to be studied or manipulated. The result is a cartography of paradoxical images that form some sort of visual traps - a game of ambiguity between what we know and what we do not know, between what is real and what things seem to be.

Q. You have stated that with your mixed technique you aim to address a field of tension within the medium of painting. Could you elaborate on that?

A. With the mix between technology-driven and traditional processes (touch-ups by hand with pencils, collage, or acrylic paint) I pave an experimental path for painting by interpreting it as a conceptual field of tension: the painting as an image.

Q. What would you like your work to evoke in the viewer?

A. Nature is a strong presence in my work – it coexists with humor and tenderness as well as the human capacity for destruction. My work does not evoke any absolute truths, it generates contradictory reactions (people may find it revolting, funny, or are simply curious) and leaves room for differently nuanced interpretations that the viewer needs to formulate based on his own frame of reference.

Q. What would you still like to achieve as an artist?

A. Of course, I would like to continue to grow as an artist and to be able to continue to produce art. But I would also like the viewer to be conscious that beyond the fun appearance of my works lies a message about what we do to the animal kingdom and to nature in general.

Q. Which other creatives, books, music, or movies inspire you?

A. Among my sources of inspiration are the Bestiaries of medieval times, the Cabinets of Curiosities of the XVI and XVII centuries, scientific drawings, also some literary works like "Metamorphoses" by Ovid, "Natural History" by Pliny or "The Book of Imaginary Beings" by Borges. The pictorial work of Hieronymus Bosch, the photography of Joel-Peter Witkin, as well as the work of the artists Keith Haring, Jean-Michel Basquiat or Eduardo Kac are part of my references as well.

Q. Could you describe your work in three words?