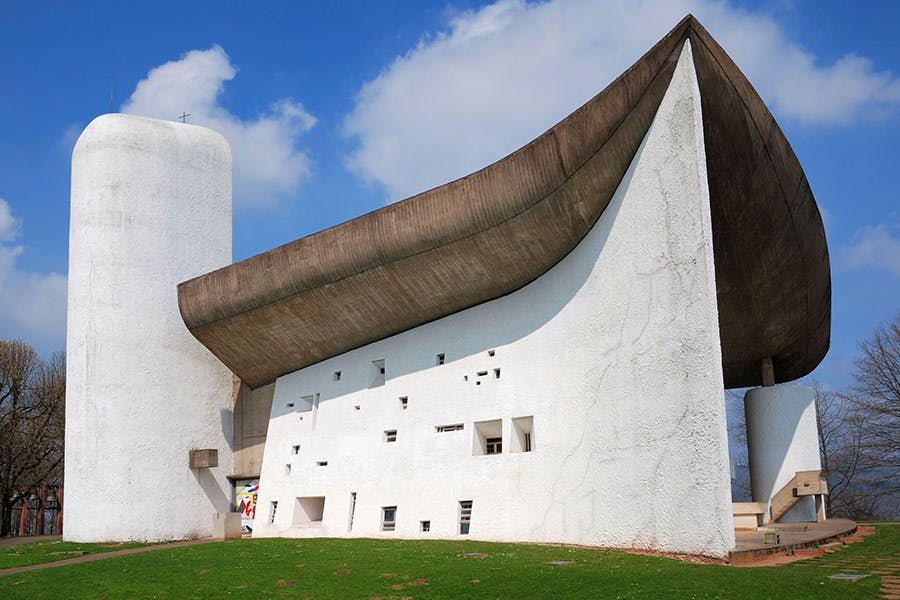 a house is a machine for living in

Le Corbusier was a visionary writer, theorist, a designer and architect, as well as a lesser-known painter. Often referred to as ‘the Picasso of architecture’, he has become a symbol of modernity.

Le Corbusier was born in 1887 as Charles-Edouard Jeanneret in a small town in the mountainous Swiss Jura region, the world’s centre of precision watchmaking. At 13 years of age, he followed in the footsteps of his father and left school to learn the enamelling and engraving of watch faces, at the École des Arts Décoratifs. There, Charles L’Eplattenier, whom Le Corbusier would later refer to as ‘his only teacher’, took him under his wing and taught him art history, drawing, and the naturalist aesthetics of Art Nouveau.

Le Corbusier soon abandoned watchmaking and continued his studies in art and decoration, with the intention to become a painter. L’Eplattenier however insisted that his pupil also study architecture and arranged some commissions for local projects.

At age 20, Le Corbusier undertook some trips through central Europe and the Mediterranean, including Italy, Vienna, Munich and Paris to take on apprenticeships with various architects. He for example studied under structural rationalist Auguste Perret and renowned architect Peter Behrens.

In 1917, at the age of 30, he moved to Paris for good. Here, he met Cubist painter Amédée Ozenfant, who encouraged him to paint. Together they developed Purism, a pictorial aesthetic that rejected the complicated abstractions of Cubism and returned to the pure, simple geometric shapes of everyday objects. In 1918 the two collaborated on the Purist manifesto ‘Après le cubisme’.

Two years later, in 1920, they expanded their theories and joined forces with poet Paul Dermée, to found a polemic avant-garde review called ‘L’Esprit Nouveau’. It was in the first issue of this new publication that Charles-Edouard Jeanneret took on the pseudonym 'Le Corbusier', an alteration of his grandfather’s last name, to reflect his belief that anyone could reinvent themselves.

In the pages of 'L’Esprit Nouveau', the three men railed against past artistic and architectural movements that embrace elaborate non-structural (non-functional) decoration and advocated for Le Corbusier’s new style of functionalism.

He called for a radical change in architecture as a consequence of the developments in technology and the rapid change in living habits between the 19th and the 20th century. He was dedicated to providing better living conditions for the residents of crowded cities. For him, it was clear that the architect had to be a a visionary and an inventor, who concentrated on people as a large collective group. He envisioned prefabricated houses, imitating the concept of assembly line manufacturing of cars.

This publication was the springboard for Le Corbusier’s entrance into practice. In 1922 he joined forces with his cousin Pierre Jeanneret, and opened a studio.

One of Le Corbusier’s most famous theoretical projects was the Maison Citrohan. This house that he also referred to as “the machine of living” displayed 5 characteristics by which the architect would come to define modern architecture:

But Le Corbusier did not limit his practice to architecture and painting. In 1925 at the Exposition des Arts Décoratifs in Paris, he exhibited his first collection of industrially produced furniture in a pavilion that was to be a “manifesto of the esprit nouveau.” Together with Pierre Jeanneret and Charlotte Perriand, he designed tables, cabinets and cube shaped chrome and leather armchairs as well as chaise longues that would later be defined as modern classics.

Although Le Corbusier, the architect, always envisioned building for large numbers of people, he initially built primarily for privileged individuals. They commissioned individual houses that were functional in design and incorporated modern aesthetics as well as rigorous geometric forms and bare facades

By 1925-26 Le Corbusier’s social ideals and structural design theories finally became a reality. He built a workers’ city of 40 houses in the style of Maison Citrohan at Pessac, near Bordeaux. Unfortunately, the chosen design and colors provoked hostility on the part of authorities, who refused to route the public water supply to the complex. For six years, the buildings sat uninhabited.

In the 1930s, Le Corbusier reformulated his theories on urbanism, publishing them in La Ville radieuse (The Radiant City). In this publication he abandoned the class-based system he had advocated before, with housing now being assigned according to family size, not economic position.

The architects rise to fame was not a straight path and many of his ideas never came to fruition. In 1927 he participated in a competition from the League of Nations for the design of its new centre in Geneva. This project, with its wall of insulating and heating glass, is one of the finest examples of the architect’s gift for functional analysis. He defied expectations by proposing an office building for a political organization that was not a Neoclassical temple, but instead adhered in structure and design to a strict analysis of function. This plan was to become the prototype of all future United Nations buildings.

It probably would have earned him first prize but was eliminated on the grounds of not having been drawn up in India ink. This disqualification, which was rumoured to be a conspiracy on the part of conservative members of the jury, further embittered Le Corbusier in his attitude toward official architectural circles. The scandal accompanying the elimination of his design however, brought him a good deal of publicity and solidified his position as a modern avant-garde architect.

Unfortunately, World War II and the German occupation of France interrupted his architectural activities as well as his 20-year association with Pierre Jeanneret, who joined the French Resistance. Since there was little building being done at the time, he resorted to painting, writing, and reflection.

Le Corbusier created a kind of private diary by painting on paper and canvas. Many of his letters have paintings and drawings on them. As he grew older, he devoted himself more and more to the study of shapes, images and colours, and increasingly developed his own style. A famous work that crosses into the realm of architecture is the "open hand" built in Chandigarh, India, which he intended as a sign of give and take, peace, happiness, and the unity of humanity.

His free time for reflection during the war years furthermore led to the formulation of his famous “Modulor” concept: a scale of harmonious measures that put architectural elements in proportion to human stature. From the 1950’s on Le Corbusier would use this “human scale” in the design of all of his buildings.

After WWII Le Corbusier thought that he would finally be able to apply his theories for city planning during the reconstruction of France. In 1945 he prepared plans for the cities of Saint Dié and La Pallice-Rochelle. At Saint Dié, in the Vosges Mountains, he proposed rehoming the 30,000 inhabitants of the destroyed town into five functional skyscrapers. These plans were rejected, but nonetheless circulated throughout the world and became doctrine.

In early 1947 he submitted a design for the headquarters of the United Nations, which was to be built beside the East River in New York. Despite the fact that Le Corbusier was on the committee of architects who got to select the design, the project was assigned to the younger Brazilian architect Niemeyer. The committee however did suggest that he collaborate with Le Corbusier on the final project.

His exact role in creating the finished building remains cloudy, but it certainly bears his signature. It is an imposing building; the rectangular tower stands out: blue-tinged glass reflect the water below, while the two windowless concrete walls give the building a refined stature.

Le Corbusier's growing reputation attracted architects and collaborators from all over the world. He however did not position himself as a teacher, like for example his colleague Walter Gropius, but as a boss, who shut himself up in his office while his collaborators worked outside in the long hall that served as a studio. He would come to his office only in the afternoons, as he usually spent his mornings painting at home. By the mid-1930s, he became heavily influenced by Fernand Léger, who remained one of his few good friends.

Only from 1950 on did Le Corbusier become active on a large scale outside of France. In 1951 the government of the Punjab named him architectural advisor for the construction of its new capitol, Chandigarh. For the first time in his life, Le Corbusier was able to apply his principles of city planning on a metropolitan scale. He also built the National Museum of Western Art in Tokyo (1960), the Carpenter Visual Art Center at Harvard University (1964), and designed an Exposition Pavilion in Zürich that was constructed posthumously (1964).

He continued to conceive new projects until the end of his life: an art centre for Frankfurt (1963), the Olivetti computer centre in Milan (1963), the Palais des Congrès in Strasbourg (1964), and the French embassy in Brasília (1964).

Le Corbusier died of a heart attack while swimming in the Mediterranean Sea on August 27, 1965.

In 2016, 17 of his architectural works were named World Heritage sites by UNESCO.