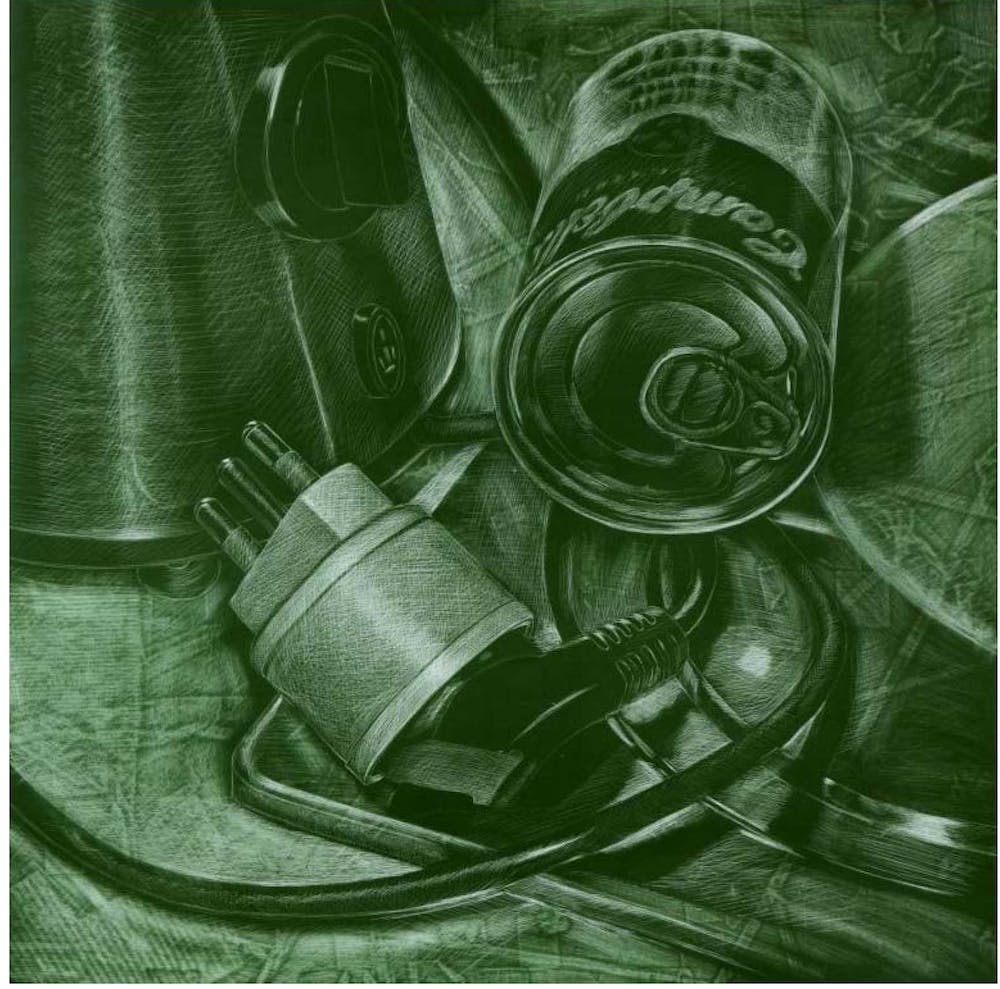 I find things by creating them and I create them by finding them.

The work of Julián Jaramillo Torres consists of impactful images with an engraving-like quality. His pieces showcase the artist's fascination with the everyday objects that surround us and the essential role they have come to play in our lives.

Torres' process is both simple and complex: he starts with the green paper used for advertising posters and tries to find the image by scratching the surface. This technique is much like an excavation: it's an act of "bringing out" and of taking away, rather than an act of creation; it is a process of discovery.

We interviewed the artist to learn more about his technique. 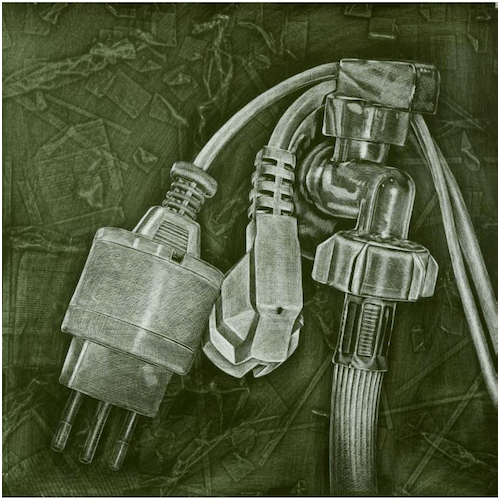 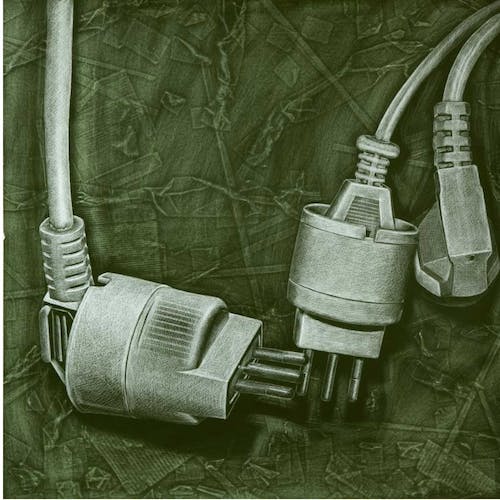 INTERVIEW WITH THE ARTIST

Did you always want to be an artist?

As a child, I rather wanted to be a scientist who invents and makes discoveries in a laboratory - not so much an artist. Currently this word 'artist' has been so worn and abused that it is not possible to establish what an artist really is. It is a very new term that appeared in the nineteenth century and that has undergone many transformations during the twentieth century. Even a “footballer”, already the definition of a profession, is sometimes referred to an “artist of the ball”. So should I call myself an 'abrasive artist' when a grinder can abrade better than me?

Could you describe your creative process?

Under the coated surface there is the shape that comes out through the abrasive process, the slow and meticulous excavation of the paper’s colored surface. The green paper comes from the recycling of advertising. I find things by creating them and I create them by finding them. 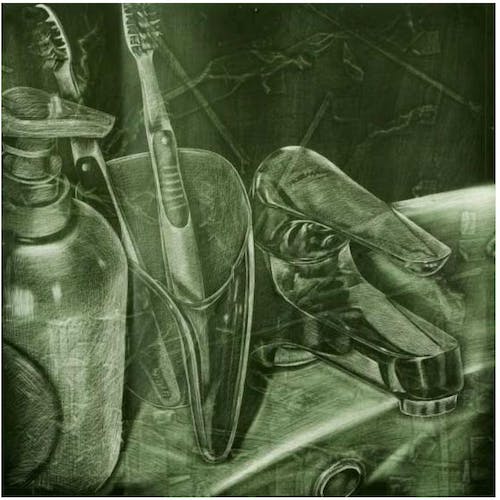 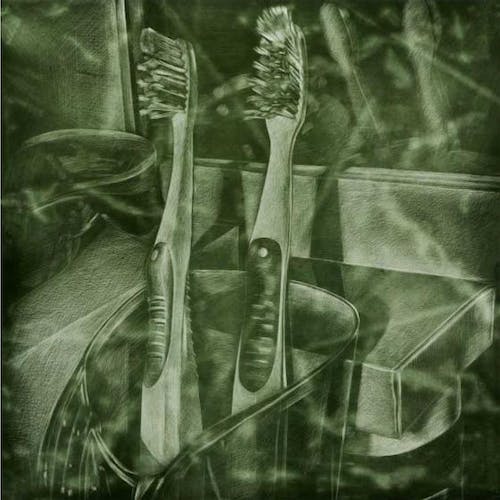 How did you arrive at this technique?

Usually, engraving starts from a negative excavation. My work does not follow this process, although it has probably been influenced by it during my artistic training in Brera and at the École National Supérieur des Beaux-Arts de Paris, where I took several engraving courses.

My way of using that technique has evolved further - I see it as the work of the sculptor. In fact, I have always thought of it as the process of revealing something that is under the surface – a bit like Michelangelo Buonarroti. I am digging to bring the picture back to the surface. Scraping and scratching the patina the way I do is closer to sculpture than painting.

At first, I wanted to use a certain green tone but I couldn’t find it. Then one day, while passing some advertising posters in the subway of Milan, I saw a poster printed in the exact green that I was looking for. I tore a piece off and while I was waiting for the metro, perhaps because of nerves, I started scraping it with my nails and that's where the whole technique started. Since then, I have started to recycle the green paper applied to old advertising banners and billboards (something you only see in Milan, I think...) and to use all sorts of tools to abrade it.

How do you choose your subjects?

The subjects are born from my everyday life. I'll give you an example: during this second lockdown here in Italy, in addition to a very lovely cat that keeps me company, I felt accompanied by everyday objects and often my gaze became fixed on them: on a cup, a glass, a pot. I was struck by their shape and the space they occupy in my field of vision and how their presence restores trust to us human beings and helps us to anchor our identity through the emotional bond we have with them.

What would you like your work to evoke in the viewer?

The viewer is free to establish any kind of visual or emotional relationship with my works. I cannot impose my own way of seeing. I can just show my way of seeing.

What would you still like to achieve as an artist?

I would like to carry out the commitment that I made to myself when I was a teenager who left everything behind (my home country, my family) and I came to Europe alone: to live of my artistic skills. 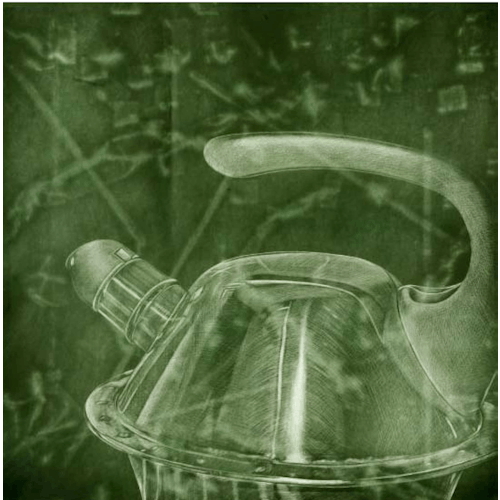 What other creatives, books, movies or music inspire you?

From the creative narratives of Gabriel García Márquez and the meticulous writing of Stefan Zweig I have learned to establish a relationship with things - with objects. I have learned to distinguish three kinds of objects that we have in our lives: those of consumption, these are the ones that sustain life; those of daily use that help us to establish our identity; and artworks that are neither made to be consumed nor to be used. Many of their words have crystallized in the type of works I make.

The creative research of the German choreographer Pina Bausch; the way she brings her pieces to light has influenced me a lot. Everything in her work comes down to the universal need for love.

Above all, the work of Hannah Arendt has been decisive in my artistic path since I read her most famous book: The banality of evil, when was only 13. Her thinking consists of three pillars: first of all, it questions the world and our relationship with it; second, she poses that the improvement of the human condition is fundamental; and third, it opens you up to the realization that our culture is shattered and that with the leftover pieces you can always do something useful...

Art, for me, as in Hannah Arendt’s, is always an open question and not a definitive answer.