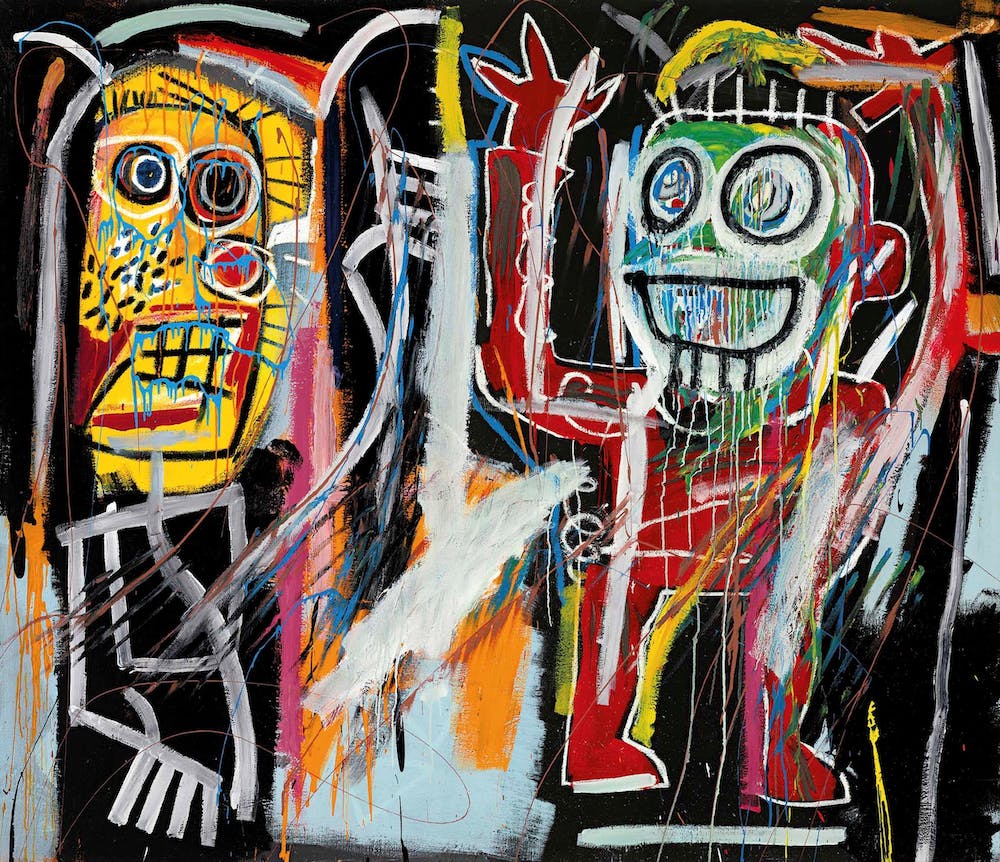 A poet, musician and graffiti prodigy, Jean-Michel Basquiat was a multifaceted artist who had honed his signature painting style of frantic scribbling, elusive symbols, and mask-and-skull imagery by the time he was 20.

Often associated with Neo-expressionism, the young artist drew his subjects from his Caribbean heritage and a convergence of African-American, African, and Aztec cultural histories. In only a few short years Basquiat received massive acclaim, showing alongside artists like Julian Schnabel, David Salle, and Francesco Clemente.

Jean-Michel Basquiat was born in Brooklyn, New York, in 1960, as the second of 4 children. His father, Gérard Basquiat, was born in Haiti, and his mother, Matilde Basquiat, was of Puerto Rican descent. Matilde instilled a love for art in her son from an early age by taking him to art museums in Manhattan and enrolling him as a junior member of the Brooklyn Museum of Art. Basquiat made his first drawings on sheets of paper that his father, an accountant, brought home from the office.

Basquiat was a precocious child who had learned to read and write by the age of four. His teachers, including artist José Machado, took note of his artistic abilities as well and in 1967, Basquiat started attending Saint Ann's School, an arts-oriented exclusive private school.

In September 1968, at the age of seven, Basquiat was hit by a car while playing in the street. His arm was broken and he suffered several internal injuries. While he was recuperating, his mother brought him a copy of Gray's Anatomy – a book that would prove to be influential in his future artistic career.

By the age of 11, Basquiat was fully fluent in French, Spanish and English. When he was 13, his mother was committed to a mental hospital, after which she would spend her life in and out of institutions. Due to the instability of his family home, Basquiat ran away at 15. He would roam the streets and sleep on park benches, but he was arrested and returned to the care of his father within a week.

However, the turbulence of his youth did not end there; in tenth grade he dropped out of school, which was reason for his father to kick him out of the house, leaving the young artist to live with friends and to support himself by selling T-shirts and homemade postcards.

During this time Basquiat and his schoolmate Al Diaz began spray painting buildings in Lower Manhattan, using the pseudonym SAMO – short-hand for “same-old shit”. The texts accompanying the tag were often a critical commentary on society. On December 11, 1978, The Village Voice published an article about the SAMO graffiti – a first indication of Basquiat’s swift rise to fame.

The young artist quickly made some influential friends. In 1979 he appeared on the sow “TV Party” hosted by Glenn O'Brien, after which the two became close; he would appear on the show several times thereafter. That same year Basquiat met Michael Holman - together they formed the noise rock band ‘Test Pattern’, which was later renamed ‘Gray’. They performed all throughout New York. During this time, he also appeared in the music video “Rapture” by Blondie. Lead singer Debbie Harry was an early patron of Basquiat’s art - he had sold her his first painting, Cadillac Moon (1981), for just $200.

Around this time, Basquiat had started to make postcards with his friend Jennifer Stein. One day, while selling postcards in SoHo, he spotted Andy Warhol at restaurant. Jennifer Stein recalls:

We were walking down the street and we were really trying to make money to live – it was not like we were rich and doing it to have fun. We needed to have that dollar, so we would do anything it took. We were walking past this restaurant and Andy Warhol is sitting there and Henry Geldzahler, who was the head of the Metropolitan Museum, and he said, ‘I’m going in!’ And I said, ‘Ok.’ I’m waiting outside a really long time, so I’m like, ‘What the hell?’ And he comes out and I said, ‘What took you so long?’ He goes, ‘They had to get change from a five.’

In October 1979, Basquiat showed his SAMO montages using color Xerox copies of his works at Arleen Schloss's open space called A's. Schloss also allowed the young artist to use the space to create his "MAN MADE" clothing, which were upcycled garments that he painted on. Basquiat furthermore convinced costume designer Patricia Field to carry his line in her small, upscale boutique on 8th street in the East Village, together with a display of his sculptures in the store window.

Unfortunately there came an end to the friendship between Basquiat and Diaz. This also meant the end of the SAMO project. They marked this ending with the epitaph "SAMO IS DEAD," inscribed on the walls of SoHo buildings in early 1980. Later that year, Basquiat began filming Glenn O'Brien's independent film Downtown 81, playing an artist like himself.

During the early 1980s, Basquiat made his real breakthrough as a solo artist. He participated in many high-profile shows and was noticed by critics, curators and gallerists. In December 1981, Rene Ricard published "The Radiant Child" in Artforum magazine, the first extensive article on Basquiat. During this period, Basquiat painted many pieces on found objects, such as discarded doors.

In late 1981, Basquiat met Annina Nosei and participated in a group show called 'Public Address' with Keith Haring and Barbara Kruger among others. He joined the Annina Nosei Gallery and worked in a basement below the gallery toward his first American one-man show in March 1982. In June of that same year, Basquiat became the youngest artist to ever take part in Documenta in Kassel, Germany, where his works were exhibited alongside Joseph Beuys, Gerhard Richter and Andy Warhol.

At that time, art dealer Bruno Bischofberger arranged for Basquiat to meet Warhol for lunch. Warhol recalled later how Basquiat:

went home and within two hours a painting was back, still wet, of him and me together.

The two artists became quick friends. Later Basquiat and Warhol would collaborate intensively; they created 16 canvases together in 1984 and ’85, merging Warhol’s silkscreened and painted logo-like text and symbols with Basquiat’s spontaneous scrawlings of skulls, animals and other narrative forms. A joint exhibition however caused a rift in the friendship, after it was slandered by critics and Basquiat was referred to as ‘Warhol's mascot’.

In November 1982, Basquiat worked from the ground-floor studio space gallerist Larry Gagosian had built below his Venice, California home. Basquiat flew out his girlfriend, then-unknown singer Madonna, to accompany him. Gagosian recalled:

Everything was going along fine. Jean-Michel was making paintings, I was selling them, and we were having a lot of fun. But then one day Jean-Michel said, "My girlfriend is coming to stay with me." I was a little concerned—one too many eggs can spoil an omelette, you know? So I said, "Well, what's she like?" And he said, "Her name is Madonna and she's going to be huge." I'll never forget that he said that. So Madonna came out and stayed for a few months and we all got along like one big, happy family.

In March 1983, at 22 years old, Basquiat was included in the Whitney Biennial, becoming the youngest artist to represent America in a major international exhibition of contemporary art. Despite his increasing success as a painter, Basquiat did not limit himself to the visual arts. In 1983, he produced a 12-inch rap single featuring hip-hop artists Rammellzee and K-Rob. The single was pressed in limited quantities and the cover featured Basquiat's artwork, making it highly desirable among both record and art collectors.

By 1984, Basquiat was an established and celebrated artist. He was showing at the Mary Boone Gallery in SoHo and often painted in expensive Armani suits. He would even wear the same paint-splattered clothes in public. In February 1985, he was featured on the cover of The New York Times Magazine in an issue titled "New Art, New Money: The Marketing of an American Artist".

The idea of the “art star” was born. The tone of the magazine article was both awed and suspicious, with constant references to a hot, possibly gullible, market in contemporary art. His work was said to be selling “at a brisk pace—so brisk, some observers joked, that the paint was barely dry,” and Basquiat himself was quoted as worrying he had become a “gallery mascot.” Whatever else was true, as the art historian Jordana Moore Saggese has said since, “this was not the starving artist the public was accustomed to seeing.”

And indeed Basquiat did spend his money lavishly throwing hundred-dollar bills out the window, and drinking only the finest wines in the most luxurious hotels. Fellow artist and friend Keith Haring even claimed that Basquiat “was all of a sudden becoming the thing he criticized.”

Even though he had become wildly successful as an artist, emotional instability caught up with Basquiat which resulted in a serious drug habit. Many of his peers speculated that his heroin use was a means of coping with the demands of his newfound fame, the exploitative nature of the art industry, and the pressures of being a black man in the white-dominated art world.

Despite repeated attempts at sobriety, Basquiat died in 1988, at 27 years old of a heroin overdose at his studio in Manhattan. During the final years of his life, he had become increasingly isolated. Many speculated that the escalated drug addiction was in part a way of coping after the death of Andy Warhol only a year before.

In memory of the late artist, Keith Haring created the painting A Pile of Crowns for Jean-Michel Basquiat. In the obituary he wrote for Vogue, Haring stated:

He truly created a lifetime of works in ten years. Greedily, we wonder what else he might have created, what masterpieces we have been cheated out of by his death, but the fact is that he has created enough work to intrigue generations to come. Only now will people begin to understand the magnitude of his contribution.

In 2018, the Brooklyn Museum hosted an exhibit called “One Basquiat” which was fully devoted to a single painting. Called ‘Untitled’, this piece had sold for a record breaking $110.5 million at a Sotheby’s auction to the Japanese art collector, Yusaku Maezawa in 2017.

Untitled is considered to be a form of self-portraiture. The painting alludes to African masks with the skull figure representing death and lifelessness juxtaposed with vibrant colors, speculated to depict the two sides of Basquiat himself.

The artist once claimed:

I’m not a real person. I’m a legend

Looking at his artistic legacy and continued popularity, he probably had a point. Today, Basquiat’s work lives at the Museum of Modern Art in New York, the Rubell Family Collection in Miami, the Museum of Contemporary Art in Los Angeles, and elsewhere.