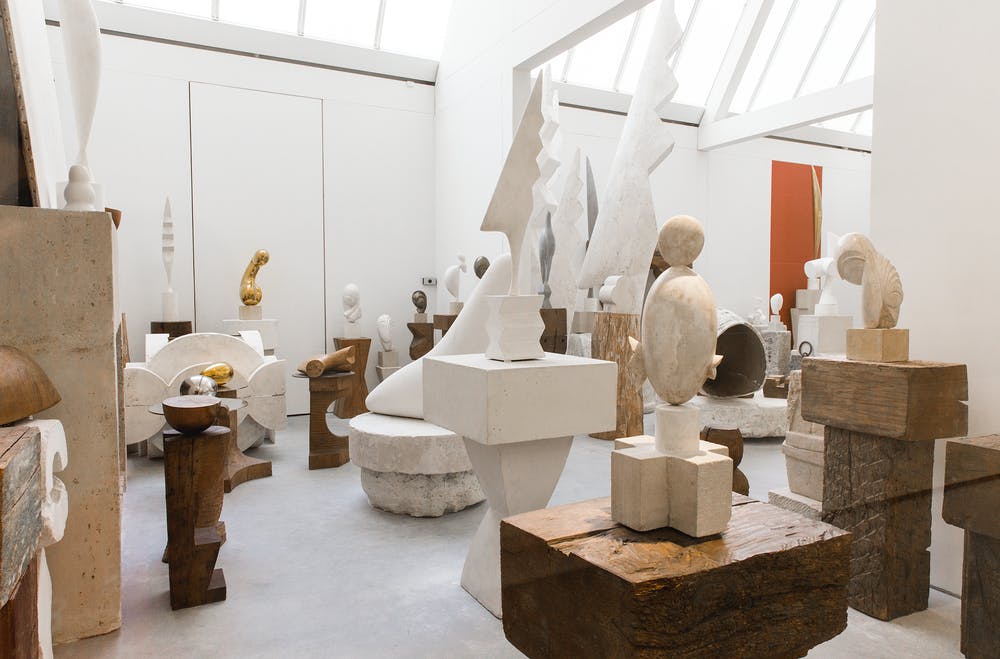 
an artwork in it's own right

The studio is my garden, here I am alone and happy

At the turn of the 20th century, Constantin Brancusi arrived in Paris in quite a dramatic fashion. He had left his native country of Romania in 1904 and walked all the way to Paris, crossing Austria and Germany and nearly dying of pneumonia along the way.

The artist moved to No. 8 Impasse Ronsin in 1916. It was there that he began to craft his pared-down forms out of stone, polished metal, and wood. His fascination with different materials and textures was reflected in the boulders and blocks of stone he left scattered about his studio, which simultaneously served as props for displaying work.

In 1927 however, the floor gave out under the sheer weight of these blocks, forcing Brancusi to relocate to No. 11. This studio expanded slowly over the years. He first used two and then three studio spaces, knocking down walls to create the first two rooms in which he exhibited his work. In 1936 and 1941, he added two other adjoining areas, which he used for works in progress, and to house his workbench and tools. A big part of his life played out inside these studio walls, where he lived, worked, and entertained many social gatherings.

The relationship between his sculptures and space they occupied was of crucial importance to the artist. In the 1910s he created new works within the studio which he called "mobile groups", by positioning the sculptures in close spatial relationship, thereby stressing the importance of the connections between the individual works. By the 1920s the studio had become more of an exhibition space and a work of art in its own right. His focus on spatial relationships led Brancusi to revise the position of the artworks daily to achieve the unity he sought.

By the time Brancusi was an elderly man, he could no longer lift his tools and instead devised a pulley system to do it for him. At this point, his studio still served as a gathering place for fellow artists, visitors, and collectors.

He would invite us to visit his atelier, and it was so beautiful, with the light coming from a certain angle to make this wonderful shape

However, as time went on, Brancusi became less and less willing to part with his work. By the 1950s, he had stopped making or exhibiting new work altogether. Instead, he spent his days rearranging his sculptures in his studio. Their placement became so integral to him that when he sold a work, he would replace it with a plaster cast so as not to upset the harmony he created within the studio.

It was not only the carefully orchestrated placement of artworks that served as an expression of the artist’s vision. He also hand-crafted all the furniture and displayed his tools prominently on the wall.

In many ways, the studio had become his final work of art. In 1956, Brancusi bequeathed his entire studio to the French state, on condition that it would reconstruct it just as it was. After an initial partial reconstruction in 1962 within the museum collections at the Palais de Tokyo, its exact replica was produced in 1977, opposite the Centre Pompidou. After being flooded in 1990, it was closed to the public.

The present reconstruction, built by the architect Renzo Piano is presented as a museum space containing the studio. Piano tackled the problem of  making the space open to the public while respecting the artist's wishes by creating a protected, interiorized space where visitors are isolated from the street and the piazza by an enclosed garden, from which part of the studio can be seen through a glass wall.

Be sure to stop by when you get a chance. The studio can be visited from 2 to 6 p.m. daily, except for Tuesdays.